Risa and Nick presented some lab research at the 2020 Fall Meeting of the American Geophysical Union. Normally, AGU comprises a whirlwind week of science from all over the world. This includes talks, poster presentations, and informal conversation over beverages. This year, AGU was a bit different. Due to the pandemic, the meeting was moved online and took place nearly 24/7 over the course of 18 days. It was commendable of the organizers to do this to try and facilitate participation by scientists all around the world. Risa gave a poster presentation comprising her Masters work examining the biophysical feedbacks to the atmosphere from the implementation of cover crops. Her poster laid out evidence for a direct cooling feedback from cover cropping in West Texas. In combination with the known carbon sequestration potential of cover crops, this suggest that this land management approach could have wide-reaching climate benefits. Nick presented some recent work on the impact of optimal photosynthetic acclimation on simulated future carbon and nitrogen cycling. Using the ELM land surface model, he and coauthors found that including optimal acclimation resulted in increased future carbon uptake at lower nitrogen use (see Smith and Keenan, 2020). In the model, this saved nitrogen was used by plants to build new leaves, further increasing future carbon uptake and, as a result, land carbon storage. These findings indicate that claims of future nitrogen limitation to land carbon uptake and storage may be overestimated. Nick's slides can be accessed on his GitHub page.


Nick recently authored two new papers on photosynthetic acclimation to global change. It is important to predict these responses given that photosynthesis by land plants is the largest flux of carbon dioxide between the atmosphere at the Earth's surface. As such, the degree to which photosynthesis acclimates to future climate conditions will dictate the rate and magnitude of future climate change. These goal of these studies was to further elucidate the mechanisms underlying acclimation responses to help inform model formulations.

The first paper, published in Global Change Biology, compares observed photosynthetic acclimation to temperature and carbon dioxide from experiments to those predicted from least-cost theory. Least-cost theory relies on the idea that plants will acclimate their photosynthetic processes such that they achieve the fastest rate of photosynthesis at the least cost, primarily water and nitrogen use. The theory is simple and based on known biological mechanisms and thus, by comparing the theory to data, can help to elucidate mechanisms underlying acclimation responses in ways that are not possible with traditional statistical techniques.

The result of the data-theory comparison indicated three important tenets of photosynthetic acclimation in C3 plants:

1. Warming increases Rubisco carboxylation to a greater degree than electron transport. This response has been observed in a number of studies and is the result of an investment shift to Rubisco relative to electron transport proteins as temperatures warm. This is likely due to the fact that Rubisco oxygenation increases to a greater rate than carboxylation with temperature. As such, a greater amount of Rubisco is needed to maximize the light available for photosynthesis.

2. Plants decrease leaf nutrient requirements with warming and elevated CO2. With warming, less enzymes are needed to maximize the light available for photosynthesis, because enzymatic rates increase with temperature. Under elevated CO2, less Rubisco is needed to take advantage of the light available, so plants down-regulate Rubisco as a result. Both of these reduce leaf nitrogen, suggesting that leaf nitrogen demand may decrease under future climate conditions.

3. Photosynthesis is restricted by electron transport under elevated CO2. The theory-data comparison indicated that photosynthesis at high CO2 was limited by electron transport, not by carboxylation, as has been previously postulated. However, it was still unclear why this was the case. In fact, plants tended to decrease their maximum rates of electron tranport under elevated CO2, but this was indicated as a sub-optimal response. This understudied area of investigation needs further research. 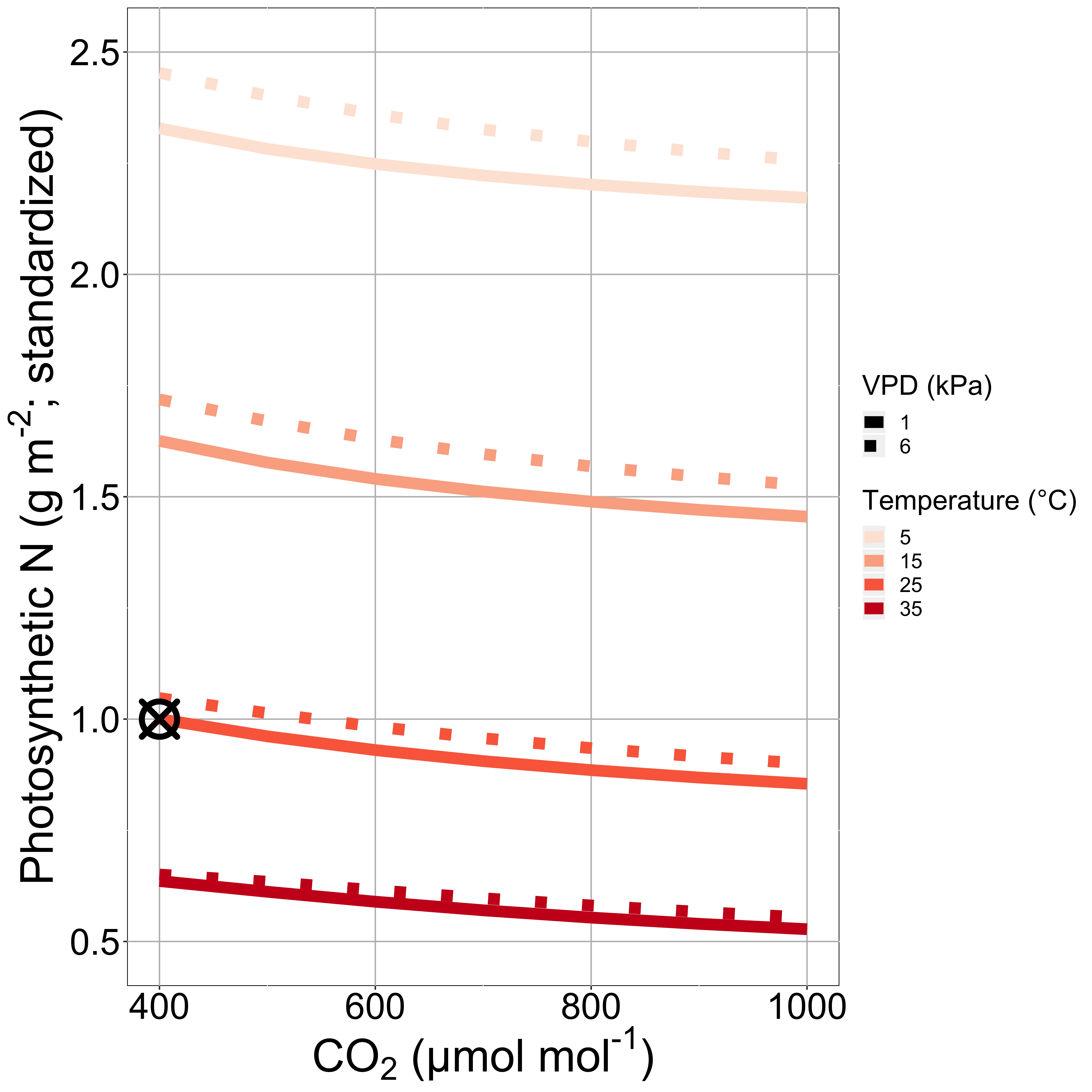 
The second paper, published in Annals of Botany-Plants, details the result of a field study at the Boston Area Climate Experiment (BACE) that examined temperature acclimation of photosynthesis under multiple rainfall conditions. Interestingly, both the warming and rainfall treatments had little impact on net photosynthesis, but the results indicated some new insights into the context-specificity of photosynthetic acclimation. 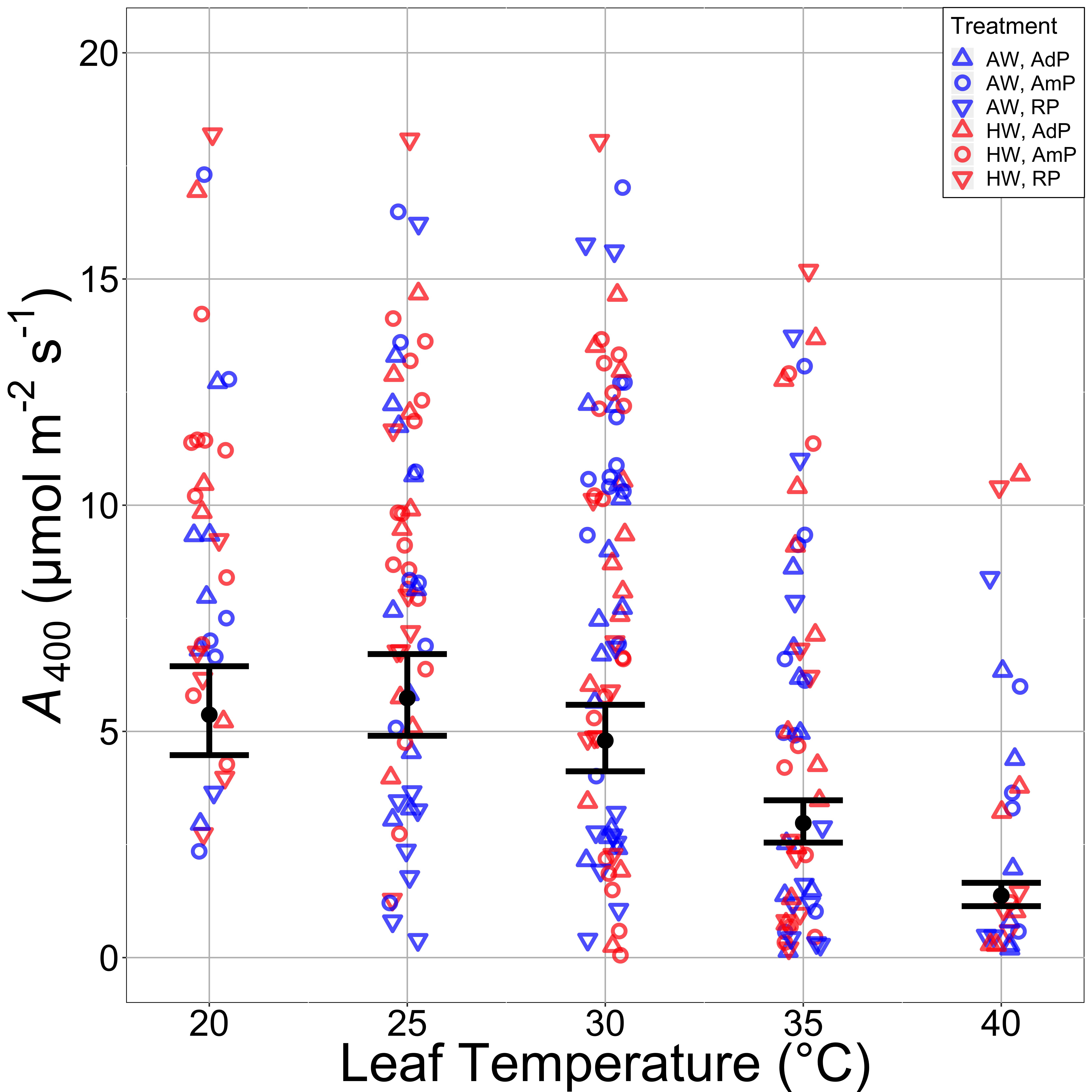 The data used in the paper can be found here: https://github.com/SmithEcophysLab/bace_2016_gas_exchange.


Nick was involved with a new publication in New Phytologist led by Jennifer Paillassa (University of Quebec) entitled: "When and where soil is important to modify the carbon and water economy of leaves." The paper uses theory and data to show how soils influence leaf traits, stomatal conductance and photosynthetic capacity (Vcmax) in particular. The paper indicates that high soil nutrient availability relative to water availability leads to increased Vcmax per stomatal conductance. The response is reversed in relatively high water availability soils. These are results expected from the least-cost theory of photosynthesis (Wright et al., 2003).

This analysis increases our understanding of how soil modify leaf traits and, because of its link to theory, it enhances our ability to reliably model these responses.

In his PhD work, Evan will be using experiments to follow up some of these results. Watch this space for further updates!

May 28, 2020: Risa successfully defends her thesis on biophysical feedbacks from cover cropping

Together, these two chapters indicate that winter cover cropping will have a cooling effects on the land surface, at least in West Texas.

Risa's novel suite of measurements have now improved our understanding of these processes as well as our ability to model them.


The Spring 2020 semester was certainly a unique one! Despite a major bump in the road with the closing of campus and shut down of research activities due to COVID-19, there were still a ton of accomplishments. Some highlights:

Risa submitted her masters thesis to her committee, which she will defend this summer. Risa's masters work culminated in two chapters that will comprise two manuscripts. In the first study, she quantifies the mechanisms underlying differences in winter and summer crop albedo and stomatal conductance. In the second, she used a more targeted study to define the drivers of winter crop albedo and latent heat flux. These novel results (and data!) will hopefully help define these critical processes in land surface models as they continue to incorporate more agricultural practices.

Evan successfully completed and presented his PhD proposal. He has outline four exciting projects that will constitute his thesis examining coupled aboveground-belowground processes and their impact on leaf-level and whole-plant processes. The proposal included a novel combination of theory and data (both observational and manipulative) that, once completed, will improve our understanding and ability to model the interactions between plants, microbial symbionts, and soil nutrition under global change.

Abigail finished her undergraduate research project examining forage grasses suitable for agricultural reclamation on saline lands. Using four species grown under different levels of soil salinity, she quantified salinity tolerance as well as impacts to leaf nutrition via leaf carbon and nitrogen measurements. She is writing up her results for publication, a huge accomplishment from an undergraduate project!

Way to go everybody!!

In one article, published in Frontiers in Forests and Global Change, we found that anthropogenic biochar had a similarly positive effect on pitch pine (Pinus rigida) performance as natural biochar in a Massachusetts forest. Fire has been suppressed for many years in these forests for many years and anthropogenic biochar provides an avenue for adding back in some of the positive soil effects of fire, without having to use controlled burns. 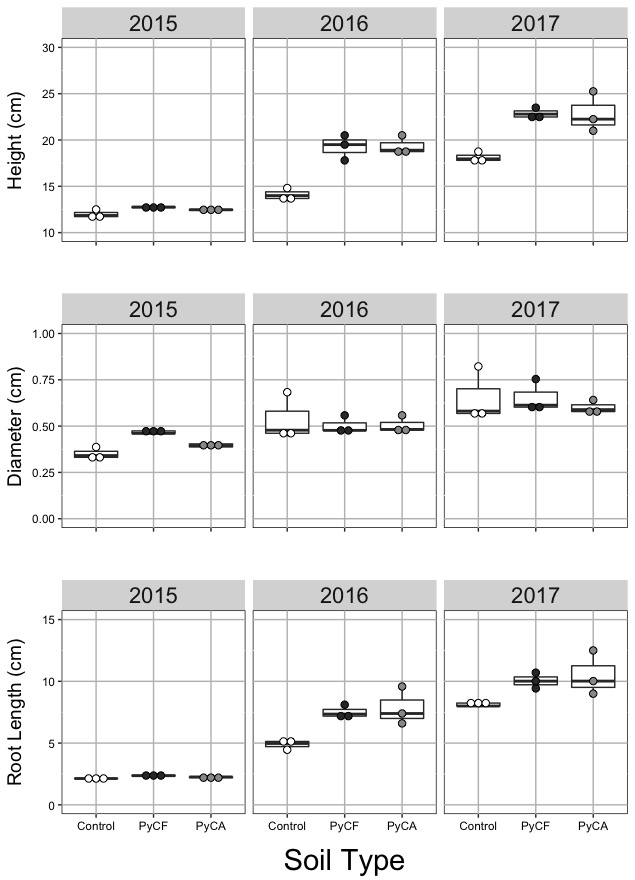 In a second article, published in the Israel Journal of Ecology and Evolution, we found that biochar improved the physiological performance of wild indigo (Baptisia tinctoria) grown on a green roof in Massachusetts. It is difficult to grow perennial C3 plants on green roofs due to the necessary use of poor, shallow soils. Our results show that anthropogenic biochar may improve soil quality and boost the performance of wild indigo, results that may be extended to other species that are hard to grow on rooftops.

Please contact Nick if you have trouble accessing these articles.

In the paper, we test the model against observational data, showing that this simple model can capture many observed spatial and temporal dynamics in GPP (r2 = 0.75 across 126 sites).

The model includes tractable and testable mechanisms that we hope to improve upon in future modeling and experimental studies.

The model is freely available as an R package and we encourage its use by other interested research groups. 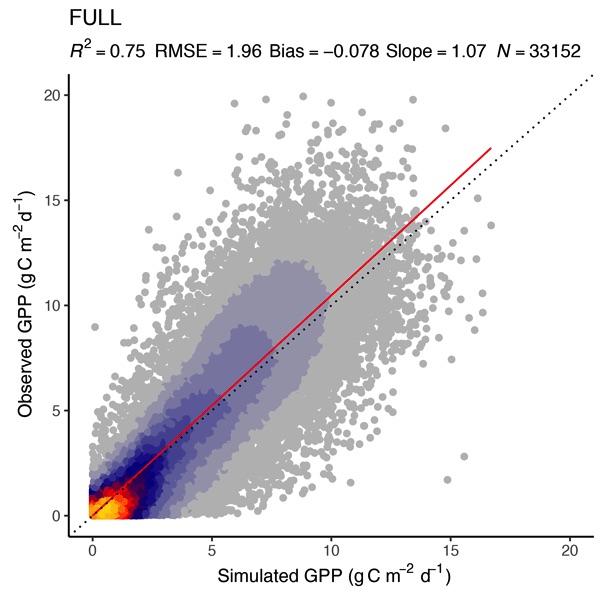 Figure 3a from the paper showing the comparison between observed and P-model simulated GPP (Stocker et al., 2020).

The analyses indicated that the optimal model matched the empirical data. This indicates that leaf respiration in predominantly driven by changes in Rubisco carboxylation and that this response can be predicted from an optimal photosynthesis model.

The model was developed such that it can be easily incorporated into land surface models as a means to improve their reliability. 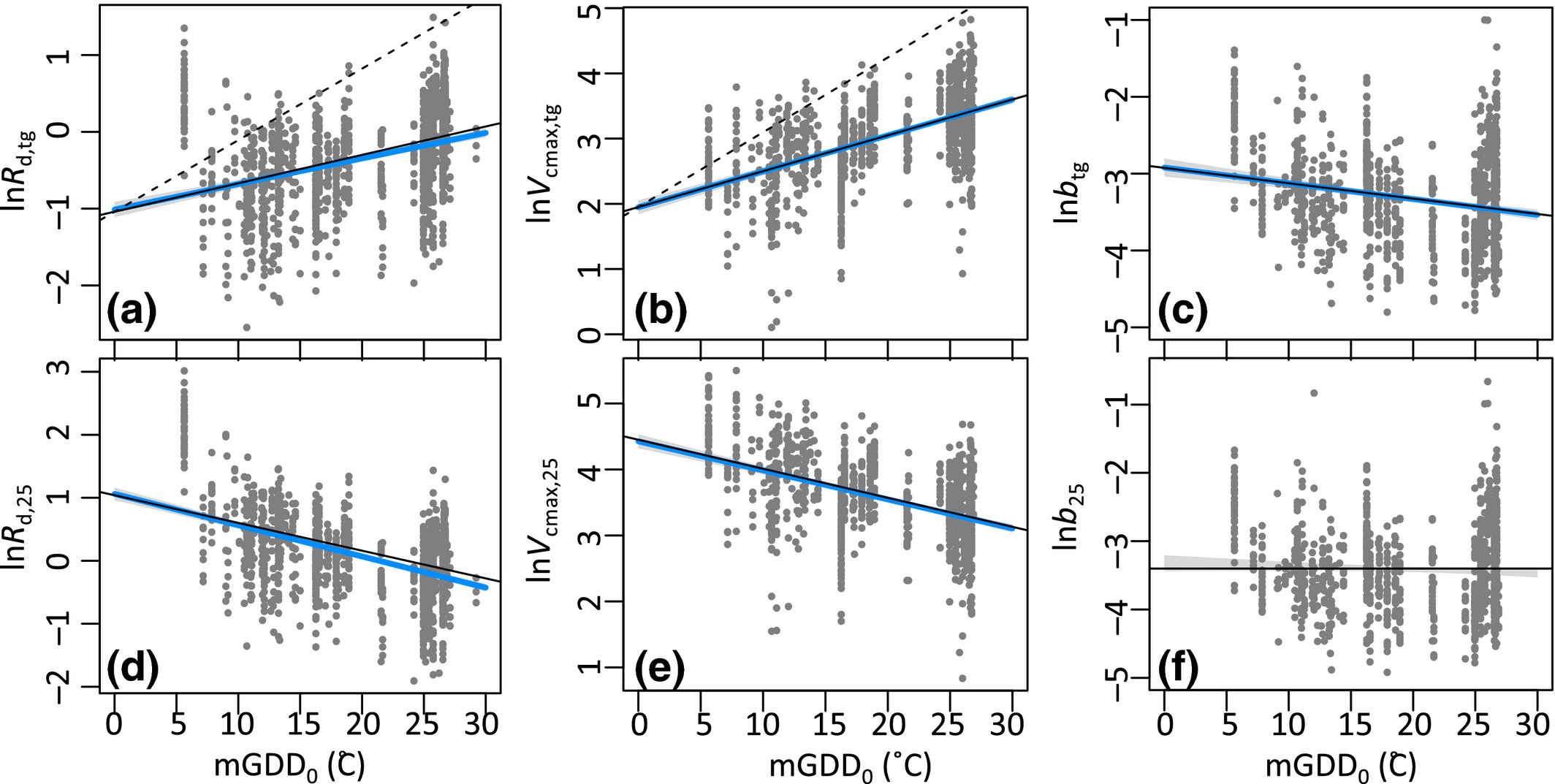 
Oklahoma University professor Heather McCarthy visited Lubbock to speak to the Biology department about all the cool Southern Great Plains ecophysiology she is doing. Heather talked to us about switchgrass drought tolerance, red cedar encroachment, and urban plant resilience to climate change. We were also able to chat with Heather about the cool research folks are doing here, which included a visit to the lbb.us Nutrient Network site. 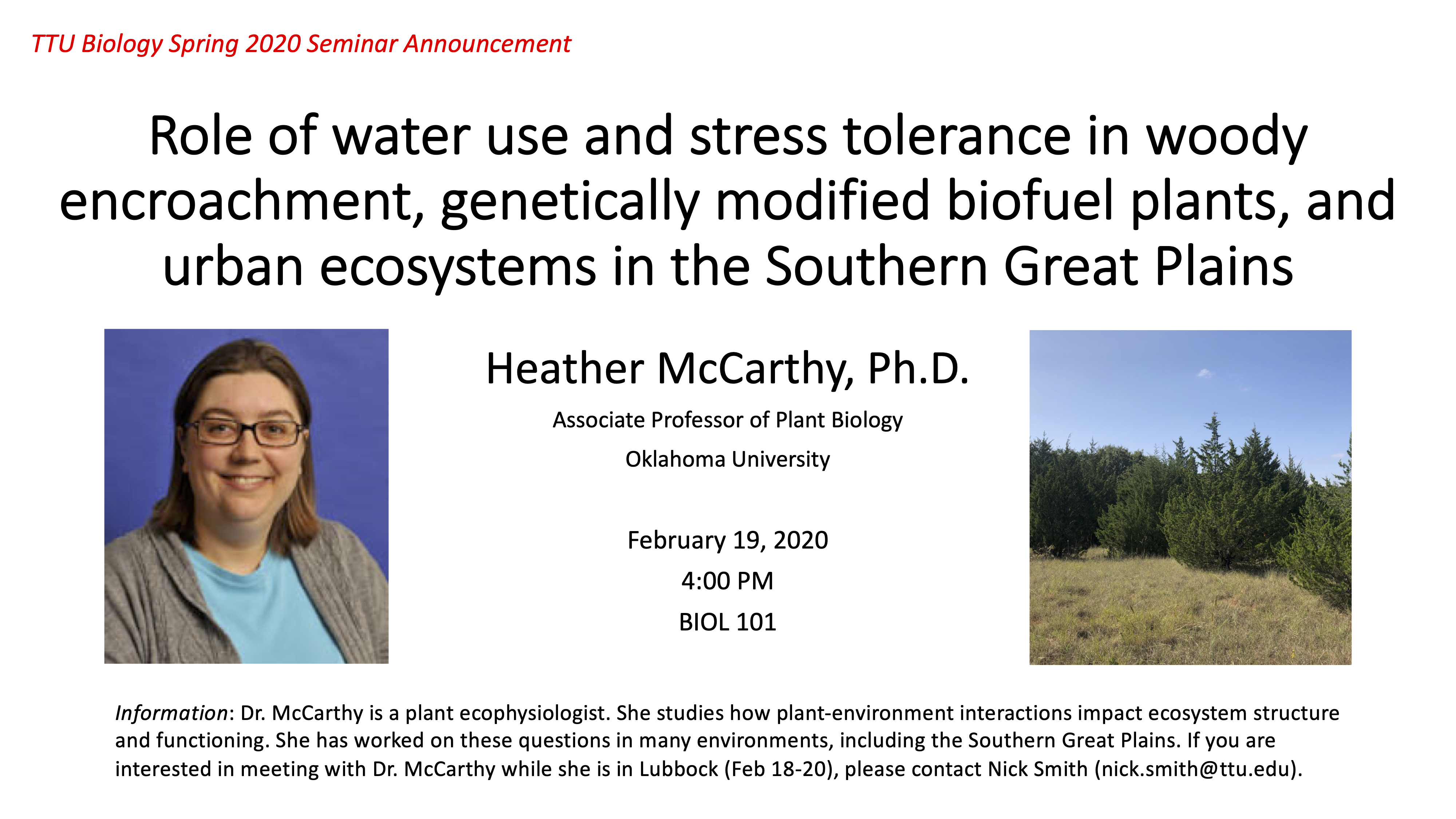 
Nick visited Alpine, Texas to give a seminar on the resilience of West Texas flora to the Big Bend chapter of the Texas Native Plant Society. The talk was part of a program on the potential impacts of climate change on the flora of the Big Bend and Trans Pecos (pronounced "paycos" as Nick was reminded!).

The talk was attended by concerned citizens and scientists alike. Nick presented some reasons for optimism for the local flora (West Texas plants are tough!), but also some reasons for concern for the region. In short: while these plants have the physiological capabilities to withstand future climates, impacts at higher ecological levels could be detrimental. These include community- and ecosystem- level impacts. Nick's talk can be accessed here. 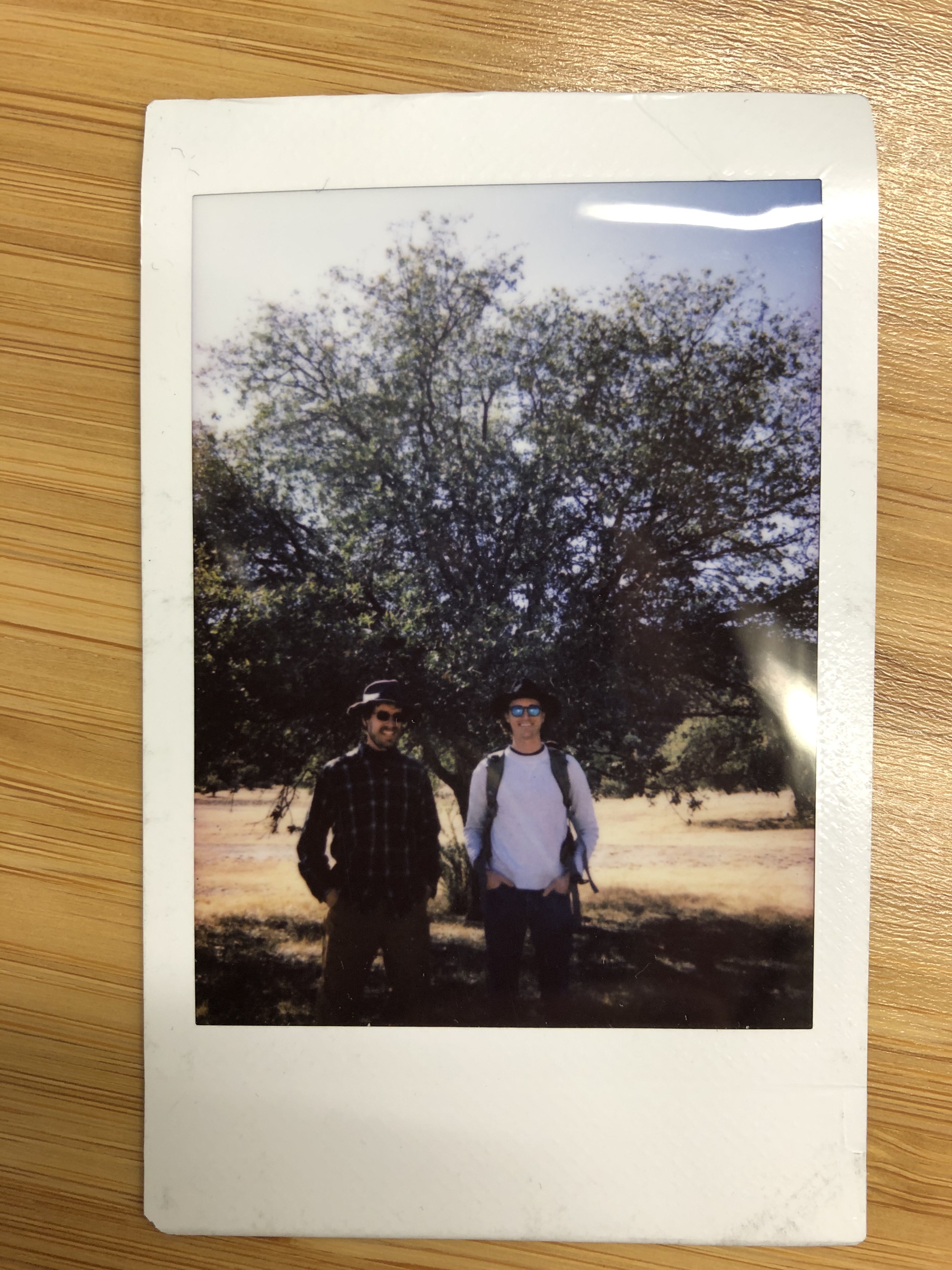 
2019 was an amazing year for the lab! It's awesome to work every day with such talented colleagues and students. This past year saw 7 lab papers published or accepted, 5 proposals funded, and 18 presentations given. Some highlights include (click each for full blog): 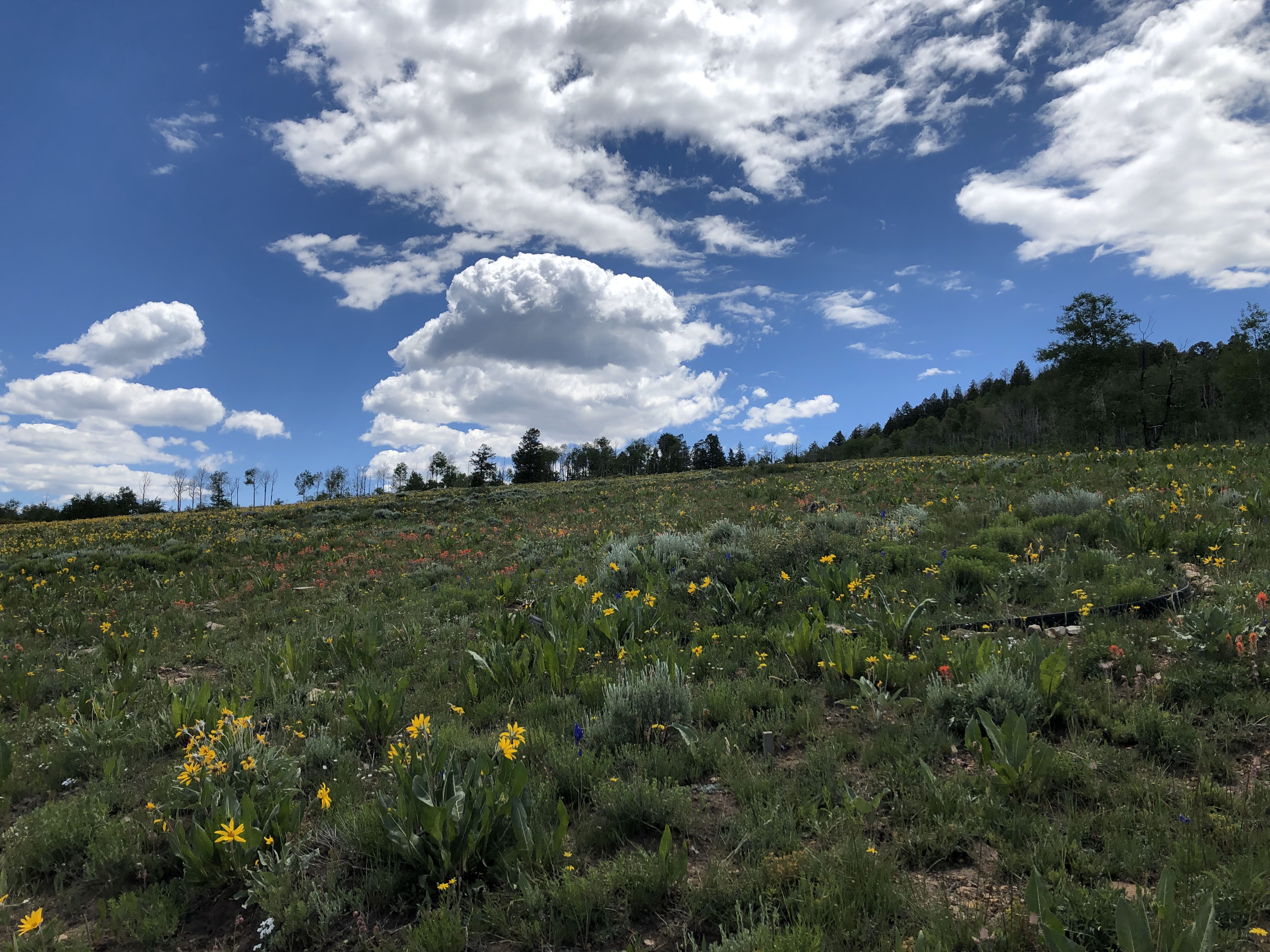